What Brands Can Learn From…

There is perhaps no more distinctive presence in the British cultural canon than Mr Blobby. A great shambling pink and yellow behemoth whose booming, multi-tonal blasts of his own name cause hilarity, fear and confusion in equal measure.

His is an enduring and multifaceted presence too. Created initially as an instrument of Satire for Noel’s House Party 1992, the blob went on to release a critically panned single (which nonetheless topped the charts), appear in a slew of his own shows, give his name to theme park attractions, and as recently as 2021 was still being cast in pantomimes.

So what’s the point? Has team Rowdy entirely lost the plot? Taking the view that all success merits studying, or perhaps seeking to prove that nothing is beyond analysis to a brand consultant, we’ve decided to reveal what we think brands can learn from Mr Blobby.

Perhaps the most obvious and important quality of Mr Blobby is just how potently, relentlessly weird he is as a character.

Acting frequently as an agent of chaos, whatever the situation Mr Blobby is inserted into he dominates and reduces irretrievably to farce. Whatever else has been taking place up until that point is transformed, by mere association, to some nonsense sideshow for the duration of his screen time.

Perhaps the appeal lies in the everyman aversion to the polished, the slick and the overly produced. Blobby’s appearance represents a puncturing of the manicured, hyperreal world of mainstream television and celebrity, revealing it to be, as suspected, a mere pretence of the sublime.

For most brands, the ability to lose the shackles, let go of the controls, and invite chaos into the room is a terrifying thought and contrary to their meticulously crafted brand worlds of guides and templates.

However, there is a time and a place for a bit of weirdness to take hold.

Earlier in 2022, new MADE.com brand director Jude Whyte announced that the made-to-order furniture retailer would be adjusting its brand strategy to be ‘a bit weirder’*, citing a raft of up and coming competitors in the homeware space as a prompt to recapture its standout energy.

It will be interesting to see the results of this change roll in, and whether they can enter the pantheon of brand weirdness alongside the likes of mattress company Purple’s “Purple Boys – Ideal Sleep Solutions and Zonk Strategies”, or the cherished and much remixed Cilit Bang Barry Scott adverts.

Whilst customers do often prize trust, consistency and security in the brands they trade with, this shouldn’t be at the expense of fun, joy or other less ‘polished’ characteristics that make your brand real and human for people.

Don’t be afraid to knock over a few shelves, so to speak.

Take a look at

The Future of the Office

It’s work, but not as we know it 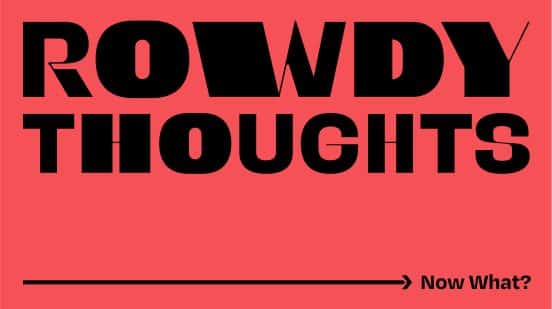 A brave new world, culture clashes and why soft value isn’t so soft.